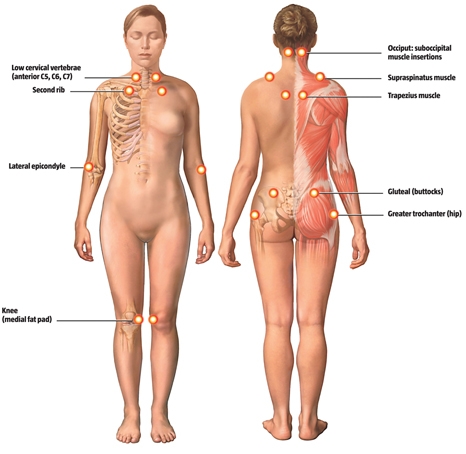 This Latin proverb is still relevant today. Without a good diagnosis, there is no good treatment. This is precisely the dilemma with fibromyalgia.

Unfortunately unknown. So far, there are hypotheses only. Researchers discovered links between the levels of certain neurotransmitters and symptoms of fibromyalgia. Neurotransmitters are chemicals that transfer signals between cells.

One type of neurotransmitter is called Substance P. One of its functions is to transmit pain sensation to the brain. Studies show that patients with fibromyalgia have elevated levels of Substance P in the spinal fluid, serum, and soft tissue.

The “hypothalamus-pituitary-adrenal axis” is part of our hormone system in which researchers noticed abnormalities in fibromyalgia patients. It regulates our physical response to stress as well as sleep and mood.

Researchers found that about one-third of fibromyalgia patients also have low levels of growth hormone. That would be another hormone system involved in the pathogenesis of fibromyalgia.

All the above findings have been connected to patients that have fibromyalgia. Unfortunately, it is unclear if the changes in neurotransmitters and hormones are the causes of the outbreak of fibromyalgia OR if they are part of the development of the disease (it’s something of a chicken and the egg debate).